Nightlife Ios: romantic and relaxed by day, unleashed at night, little Ios is one of the most beautiful islands of the Cyclades and is aimed at the youngest, offering sea life but also lots of unbridled and transgressive fun. Find out which are the best nightclubs on the island of Ios to spend a summer of pure fun!

The island of Ios is famous for being one of the Greek islands preferred by young people for nightlife . The island has been known since the 1960s as a party island and for young people thanks to the hippy movement, and the entertainment offer is comparable to that of Mykonos , albeit to a lesser extent.

Ios is a wild island waiting to be discovered , and not only offers unbridled fun but also dream beaches, architecture and crystal clear sea. An island with two faces, relaxed by day and wild at night, Ios is a destination that attracts young people from all over the world who come here to have fun, dance, drink and meet new people. Most of the tourists are British or American and the average age is around 18 to 25.

The nightlife of Ios begins in the beach bars on Mylopotas beach, the most popular and trendy beach on the island where there are the best beach clubs. Afterwards the evening continues in Chora , the main village on the island of Ios, where you will find a multitude of disco bars and pubs crowded along the main road ( "Main Road" ), which literally overflows with party people who wander from club to club. until the early morning light. This is where all the young people head to party all night, you can't go wrong!

The nightclubs on the island of Ios are very many, especially bars, discopubs and some discos with mainly rock, disco and pop music, both Greek and international. Almost all venues and clubs are free to enter and often offer special discounts and promotions on admissions and drinks. In some places, you can earn the club's official T-shirt if you manage to drink seven chupiti in a row!

For a more romantic and relaxed nightlife you can try the restaurants with traditional cuisine, which offer excellent Greek dishes at a good price, all immersed in a peaceful atmosphere. Do not forget to visit the fabulous beach of Aghia Theoditi , where you can admire a wonderful sunset and a breathtaking view, while 30 kilometers from the center of Chora you can reach the beach of Manganari , equipped with sunbeds, bars and restaurants.

Clubs and discos on the island of Ios

(Chora, Ios) Open every day from 11.30pm to 6.00am.
Active since 1974, Disco 69 is one of the longest-running and most famous nightclubs in Ios . The club is located in the main square and offers lots of music, endless booze and wild parties until dawn every night. Certainly the reference point for the nightlife of Ios and also one of the most popular among tourists.

(Mylopotas Beach, Ios) Located in the village of Mylopotas, the Far Out beach club offers beautiful sea views, loud music and good cocktails With a beautiful and well-kept environment and numerous events not to be missed, this club it's the right place to have fun and dance until the morning.

(Chora, Ios) Located on a cliff on the way from Chora to Mylopotas, the Scorpion is an after-club that opens from 3am and for the hardcore partygoers the party goes on dancing and drinking cocktails until late morning. The bar is housed in a round cave-like building, rather small but very special, and the music ranges from hip hop to dance music, to progressive trance beats. Try their special cocktail: the Scorpion Sting ! Another historical disco of the nightlife of Ios .

(Chora, Ios) Located where the Orange Bar used to be, The Bank is a trendy disco bar that is always very busy and where some of the craziest nights on the island take place.

(Main Road, Ios) Always open.
Spacious, welcoming and located on two floors, the Sweet Irish Dream is one of the largest nightclubs in Ios , with a typical Irish pub atmosphere and best known for table dancing and exotic drinks. On the first floor you will find two bars serving draft Guinness beer as well as two other bars on the second floor to keep drinking, as well as a couple of pool tables. The club starts coming to life after 3am (so don't come here early) and doesn't close until 7-8am. The proposed music is a mix of dance and club rhythms.

(Chora, Ios) Open every day from 11.15pm to 5.15am.
With a chic and modern style, the Traffic Bar is a reference point for the clubbing scene on the island of Ios , thanks to its parties with dance music and excellent drinks.

The bars and pubs of Ios

(Chora, Ios) Open every day from 22.00 to 6.00.
Located along Main Street, the Flames is one of the hottest party bars on the island of Ios . Open since the afternoon, here the party goes wild until the morning of the next day and is always full of young and beautiful girls dancing to the rhythm of pop and rock music, Greek and foreign. Really not to be missed if you want to immerse yourself in the crazy nightlife of Ios .

(Chora, Ios) Open every day from 11pm to 5am.
Open for more than 20 years and located in the main square of the Chora, the Slammer Bar is famous for its Tequila-based drinks and is very popular with lovers of alcoholic drinks. The place is very cozy with brick walls and arches dividing the bar into smaller rooms. The music ranges from the latest hits to summer classics, to hip-hop, rock, house, 70s, Latin and much more.

(Chora, Ios) Astra is a famous music bar in the heart of the Chora of Ios. It transforms from a chill out bar into a club during the evening and hosts several DJs who animate the dance floor playing Disco, House, funky and Latin music. This bar is also known for happy hour which lasts until midnight and for special drinks created with fresh fruit. Frequented mainly by Swedes and Norwegians, the Astra Cocktail Bar hosts always very fun themed parties.

(Chora, Ios) Open every day from 11.15pm to 5.15am.
The Blue Note Bar is a Scandinavian bar that has also become very popular with Germans, Brits, Irish and Australians. The bar plays mainly Swedish, rock and party music, and features a large dance floor and long bar with plenty of drinks to choose from. This is one of the busiest bars in Ios during the early part of the evening. The right place to meet some beautiful Swedish girls on vacation in Ios . If you manage to drink a certain number of shots in a row you will receive a free t-shirt!

(Main Square, Chora, Ios) Open every day from 11.00pm to 5.30am.
Located in the main square, the Coo is a bar with a minimalist character that offers R'n'B and Hip-Hop music in an extraordinary atmosphere. Its interior becomes fully lit and vibrant with ever-changing hues and professional bartenders keep customers happy with an immense variety of delicious cocktails mixed with fresh fruit, chocolate, homemade syrups and coffee.

(Main Road, Ios) Open every day from 11.00 to 2.30.
A mix of fun activities and upbeat moments await you at the Ios Fun Pub, one of the oldest bars on the island. In particular, this bar is one of the first to open for the summer season and one of the last to close the season, welcoming guests from April to October with a myriad of pool tables, foosball tables, darts and giant Jenga. Known for its Sunday roast, this bar also hosts a variety of fun contests every night, back screen movies and karaoke nights. The setting is illuminated by soft lighting, with flags hanging from the ceiling and comfortable furniture scattered all around.

(Chora, Ios) Open since 2002, the Bull Dog is a bar on Ios appreciated for its parties with commercial music, exotic cocktails and exclusive shots.

(Petalotis-Koumbara, Ios) Pathos is a charming lounge bar with a breathtaking view of the sea that offers one of the most popular aperitifs in Ios, with poolside dinner and DJ sets until 9.30pm. Not to be missed.

(Chora, Ios) Open every day from 20.00 to 1.00.
Located along the main road, the Katogi Tapas Bar is a tavern with Greek and Spanish cuisine that offers tasty typical and original dishes. Located inside a small colorful courtyard and immersed in an intriguing atmosphere, the place is divided into two internal rooms and a bar. Remember to book in advance as it is always full.

Map of clubs, pubs and bars in Ios 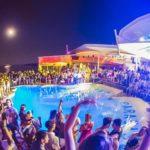 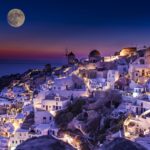