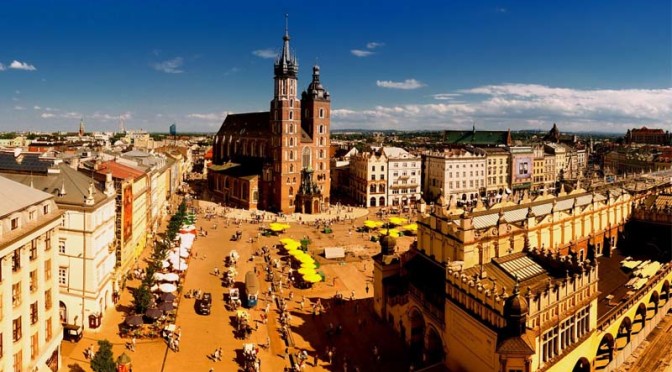 Are you headed to Krakow for a weekend dedicated to nightlife and have no idea what to do during the day (other than recovering from the hangover) ?? Here is an essential guide about the places to visit ...

What to see in Krakow

Krakow is a charming town in Lower Poland, located in the region called “Małopolska” (meaning Lesser Poland), famous for its medieval architectural atmosphere. It has long been the capital of the country, and to this day remains its main cultural, artistic and university center. With more than eight million visitors each year, it is Poland's leading international tourist destination. The city will remain in your mind for its small and well-kept historical centre, for its immense central square and for the well-kept strip of gardens 50 to 100 meters wide which completely surrounds the centre.

The historic center of Krakow.

Its main square, the "Rynek Głowny" (literally "market square"), is the largest medieval square in Europe, and is surrounded by buildings dating back to 1500-1700. On the north-east side of the square stands the Basilica of Santa Maria ( “Kościół Mariacki” ). From the highest tower of the church you can hear a trumpet sound coming: a trumpeter plays a melody four times, in the direction of the four cardinal points, interrupting it abruptly. The story tells that, one night in 1241, a sentry, posted to guard the city, blew the trumpet to warn the Cracovians of the imminent invasion of the Tartars; the danger signal was soon broken due to an arrow that pierced the throat of the courageous lookout thanks to which the city was able to prepare the defenses and repel the attack of the enemies. Since then, at every hour and every day of the year, the episode is remembered with a trumpet sound interrupted in the middle of the same beat. At the center of the Rynek stands the "Sukiennice" , the old fabric market, now a place used for the sale of souvenirs and typical products for the many tourists.

At the end of Florianska we find the only stretch of the old city wall still standing, in correspondence with the gate of San Florian ( "Brama Florianska" ), the only remaining gates that once defended the city. Now at its foot you can see numerous exhibits and paintings by local artists. Opposite the Brama Florianska is the Barbican ( “Barbakan” ), a 15th-century military defense bastion, built to protect the city gate. From here extends the city park ( "Planty" ) which unfolds in a ring around the old city.

The Jewish quarter of Kazimierz

Located in the south-eastern part of the old city, the neighborhood was founded by King Casimir III in 1335 and was later named after him. Kazimierz is divided into two parts: in the west there is the Christian one, in the east the Jewish one. In the Christian part there is the Market Square ( “Wolnica” ), the Gothic churches of St. Catherine and Corpus Christi and the Baroque church of St. Stanislaus. Kazimierz was, above all, the center of religious and social life of Jewish Krakow. For centuries it was a place full of churches and synagogues where Poles and Jews lived peacefully next to each other, until the Semitic community that inhabited it was deported to various extermination camps during the Nazi occupation. Schindler 's Factory , located in Lipowa , not far from the centre. The story of Oskar Schindler , the German entrepreneur who managed to save about 1200 Jews destined for the Auschwitz , was represented in Spielberg's "The Schindler List"

If you love legends, Krakow Castle ( “Wavel” ) is just the right place: according to tradition a dragon lived here, in a cave at the foot of the hill and terrorized the city. The king promised whoever killed him half of the kingdom and his daughter in marriage: a shoemaker succeeded who made him eat a lamb filled with sulfur forcing him to drink the entire Krakow river (Vistula) until he burst! In memory of the legend, still remains, at the entrance to the castle, a statue of the dragon from which flames of fire come out. Beyond the legends, the Krakow Castle is a symbolic place for all of Poland: it was used as a royal residence and as a place from which the Polish royals ruled the country for five centuries, from 1038 until 1596, before the capital became Warsaw. Many rooms can be visited together with the Royal Chapel, the Royal Treasury and the medieval armoury.

The working-class neighborhood of Nowa Huta

It is the industrial district of Krakow built in the socialist era. There are no particular attractions. Nowa Huta is fascinating because it represents the model of the communist city: huge avenues, many green spaces, tower blocks in typical socialist style. Here lived the workers with their families of the Krakow steel mill around which the district was built. It is 9 kilometers from Krakow and is impressive for its extension: when the plants were still in full swing they employed 40,000 workers, while the steelworks alone is 5 times the size of the historic center of Krakow. His visit then ends with the Ark of Peace, the church built by Karol Wojtyła in strong opposition to the communist regime. According to the socialist regime it had to be the ideal city, with wide avenues, green spaces and a very intense collective life. In practice Nowa Huta was a place polluted by the fumes of the steelworks where people forced to live in identical and anonymous condominiums.

Just 13km outside the center of Krakow are the Wieliczka which have provided Poland with salt and wealth for centuries. After the end of production they were recovered to make them a tourist site. Most of all, the " Salt Cathedral ", a real church of 54 x 18 x 12 meters in height, dedicated to the Blessed Kinga , the patroness of Polish miners, is astonishing. The mines consist of almost 300 km of tunnels with bas-reliefs, decorations, ponds and there is also a space for saline inhalation. An astonishing scenario more than 100 meters below the surface of the earth, not only for the impressive size but for the beauty of what appears: the floors, the altars, and the columns are carved in salt crystals, and the biblical scenes adorn the rock salt walls. To carry out the work it was necessary to remove 20,000 tons of salt and it took thirty years of work. The chapel often hosts concerts and art exhibitions and is also used as a location for wedding ceremonies.

Auschwitz-Birkenau , located near the town of Oswiecim a few kilometers from Krakow, was the largest concentration, forced labor and mass extermination camp built during the Second World War by the Nazis. About a million people died here, including deportees, prisoners of war, but above all Jews and gypsies. Today it is a place dedicated to the memory of the victims and horrors of the Holocaust. The camp is open every day and admission is free. 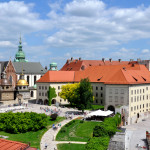 Offers for tours and activities in Krakow

Krakow: where to eat

Krakow: where to sleep

Krakow: how to get to the transport center and connections to Balice and Katowice airports